Prior to subjecting the SMD part to the IC preconditioning test sequence, the device’s desired moisture sensitivity level (MSL) must be established. This MSL level will determine acceptable storage times for unsealed devices awaiting assembly. The IC preconditioning test should be performed at the highest temperature that the SMD is expected to encounter during the actual surface mount assembly process. 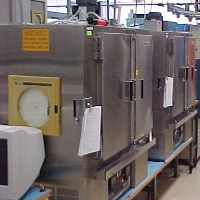 All non-hermetic SMDs submitted for IC preconditioning testing will go through the following sequence:

Get in touch for more information about Preconditioning Testing.

IPC/JEDEC J-STD-020D.1 is the standard used to initially identify the classification level of non-hermetic solid state surface mount devices (SMDs) that are sensitive to moisture-induced stress so they can be properly packaged, stored and handled to avoid damage during assembly. It is usually performed at two levels chosen to bracket the expected level of capability.

JESD22-A113F is the test method that establishes an industry standard preconditioning sequence for non-hermetic solid state surface mount devices (SMDs) that are subjected to multiple solder reflow operations. The SMDs should be subjected to the appropriate preconditioning sequence prior to being submitted to specific reliability testing to evaluate the long-term reliability.

The tests should be performed at the highest temperature that the SMD is expected to see during its actual assembly.