The Krypton-85 Leak Testing method is a highly sensitive technique used to measure fine and gross leak rates in high reliability devices. It is the preferred method to characterize small leak rates in critical military components.

The technique was developed in the 1950’s and is still in use today for evaluating military hybrids, commercial sensors, medical implants, silicon based MEMS packaging applications and many others.

The Krypton-85 method is also capable of finding thermally induced or pressure induced hermetic failures and has proven to be highly effective in the failure analysis process.

The device is placed into a specialized test chamber and pressurized with a gas mixture of air and small amounts of Krypton-85 gas. The mixture will then enter the package cavity if a leak is present. The Krypton-85 leak rate equation determines the pressure and duration of the test based on a reject leak rate value. The client only needs to determine the reject leak rate (Qs) value for the package under test.

After the pressurization cycle, the packages are screened using an X-ray scintillation crystal. The crystal is capable of detecting up to 15,000 cpm/uCi of residual Krypton-85. This type of ultra sensitive detection capability allows for the measurement of extremely small quantities of Krypton-85 gas that may have entered the package.

The net X-ray count rate measured is proportional to the total Krypton-85 content within the package. The count rate measured is the actual detection of the disintegration rate of Krypton-85 molecules. Each Krypton-85 molecule emits a 0.51 MeV Gamma ray. The total number of molecules that entered the package can also be calculated and hence the total leak rate of the package. In addition, the detection process is performed at ambient conditions and thus the packages are not exposed to vacuum. Testing at ambient conditions mitigates or eliminates the problems encountered with helium based leak testing.

Severe Gross leaks may be detected using a small directional counter (Geiger Müller tube) that detects the 0.69 MeV Beta particles. This system can be used to pinpoint the exit site of the gas from the package.  Kr-85 testing also includes a dry and / or wet Gross leak method as part of the test protocol. 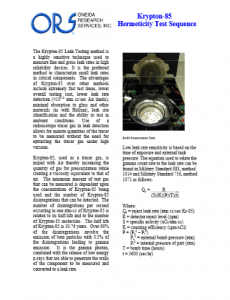